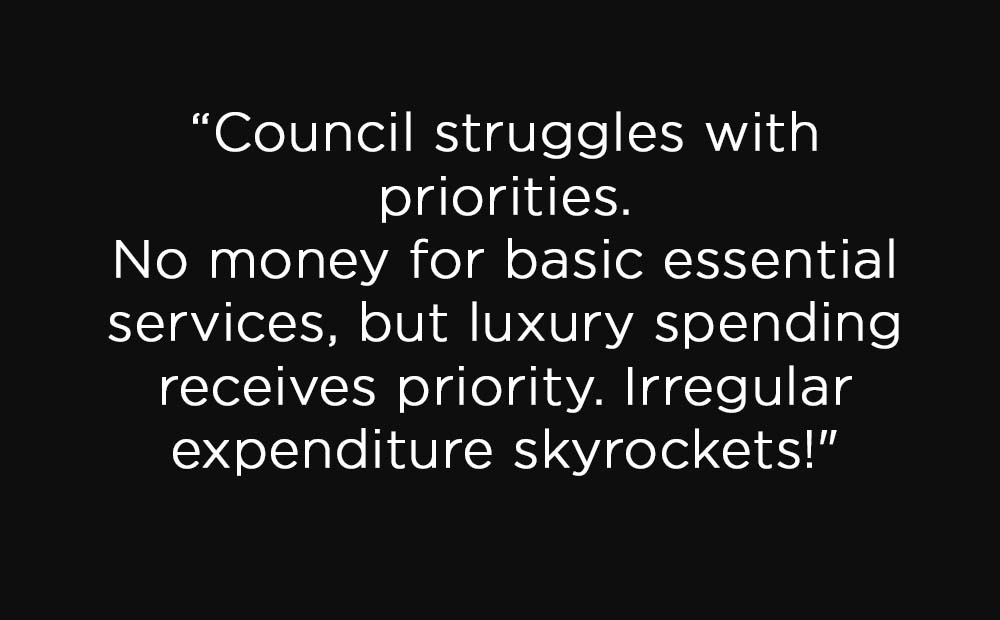 The 30 October 2020 Mayco and Council agendas had some interesting information in them.  Excerpts are below.  It is concerning that Bitou’s debt stands at R335 million and climbing; National Treasury provided Bitou with R17.3 million for Covid relief which is being spent on staff bonuses; of the R50 million awarded in tenders last quarter, less than 1% was awarded to local business and is illustrative of how much the municipality cares about our local economy; overtime continues to be out of control; and irregular expenditure amounted to half of total expenditure last year, with no controls and no consequence.

The confirmed minutes of the 25 Aug. Council agenda reflected a decision to approve a three-year lease for an unbudgeted university on scarce housing land purchased at great expensive for housing.  Councillor Olivier was the only councillor to record her vote against it.  We hope she shares with us what motivated her decision.

The contributors to this huge debt still remain household debt which represents 96.9% of the total.

Debt outstanding per suburb as of August 2020:

The report says 934 household accounts in Plett (not the suburbs) had their electricity disconnected in August due to non-payment.  Judging by what is being said on social media, that sounds plausible and it shouldn’t be long before the entire central of Plettenberg Bay is in darkness.   We believe this unprecedented number of people who normally always pay their bills and are now unable to do so shows that the town’s economy has been devastated, and if this is the case, in the areas which were better placed to cope with an economic downturn, the devastation of people’s lives in the townships must be horrific.

National Treasury allocated a grant of R17,322,000 to Bitou to address Covid-related matters.  Council’s choices on how to apply the money do not illustrate an understanding of the dire situation our town faces.  Bitou is spending it as follows:

Out of R17.3 million, they creamed R3.6 million off the top to pay to 300 staff in the amount of R12,000 each.  The municipal workers are the best paid and have the most secure jobs of anybody in Plett and few of them have carried out tasks which have brought them into direct contact with Covid-infected individuals, any more so than anybody in the community going about their daily business.  They are the last people that the government should be giving extra money to.  There are many people in our community who desperately need assistance to survive.  This money is being taken from them.

R5.992 million on “decanting of informal areas.”   This is not English and is meaningless.  The agenda does not say what is meant.  We invite the councillors to tell us what it means.  With the little information available to us it appears this is once again an over-priced service at a highly inflated price. We guess it means providing sanitizing liquid.  Do you know how many litres of liquid that is? Are they really using it or is it running out on the ground?   (In the Mayco agenda it was called “provision of emergency housing in Qolweni,” but was retitled to “decanting” in the Council agenda.)   So what is it REALLY being spent on?

R1.5 million in protective wear and sanitizing of employees.  What besides simple face masks are required?  Who needs protective wear except people in clinics working with sick people?  Health officials are funded by Province.

R1.5 million fogging and sanitization of public areas.  What on earth does fogging do?  Out in public areas?  Who is getting that contract?

Supply Chain Management Report:  1 July – 30 Sept. 2020.  Bitou’s burghers are suffering the economic effects of Covid, revenue collection is down to 75%, and the municipality deems it essential to award the following tenders in the last quarter:

-R437,000 for firearms training of the MLEs!  At 50,000 per MLE, it is out of all proportion.  For a company to travel to Plett and teach 9 people to be firearm competent would take one person two days.

-R124,000 to map a cycle route.  Why is Bitou paying for that, and why did they award it to the ex-CEO of Plett Tourism’s personal company, and why such a huge amount?  It’s a simple task that even a junior school child could do.

-R1.9 million for cloakrooms for Bossiegif sports facility.  How do you explain these exorbitant numbers?

-R2.9 million to upgrade the parks in greater Bitou — project completed.  Anyone notice the improvement?

-R1.739 million for Qolweni Cultural Village, funded between Bitou and Plett Tourism. (Bitou just spent R170,000 to fence the councillor’s office in Bossiegif, plus R57,840 for razor wire around his office.  And we’re going to make it a tourist destination??)   The decisions are questionable; why spend R1.7m on a cultural village, when this has been done in Bitou in the past and has failed, and elsewhere in the Western Cape. It is hard to find any such project anywhere in South Africa that has proved successful and sustainable.  On top of that, and specifically in this instance, we have massive instability in that community, and the public order police have just been called in, so it is unlikely that tourists and tour operators will risk going there.  The only reason that council would consent would be for reasons other than establishing such a facility.

Eleven tenders were awarded in July – Sept. in the amount of R50 million.

One tender was awarded to an enterprise in Bitou area in the amount of R452,000, or less than 1% of the total. The balance went to companies outside of Bitou.

In the first quarter:

Why is the MM’s office paying O/T to those people?

It is totally out of control with no accountability.  We do not know how many of the positions qualify for being paid overtime, so taking the full number of employees, that works out to an average of R4,600 per employee in one quarter.   And now council is giving 300 employees R12,000 bonuses each from the Covid relief fund on top of that.

MPAC, the investigating and consequence committee of council, was instructed to investigate and take action, just like every quarter before this.  The committee has done nothing about it for years.  We call on Councillor Kamkam, chairman of MPAC, to bring a report to council to report what she has done and not done.

The following projects were implemented with a “budget that had been allocated to other projects,” but apparently the municipality thought these took precedence.

I guess you can’t have too many fences.  The fencing is done by T Maqanda, who received another recent tender for R939,001.

We would like to take on some of the most blatant abuses, but to do so we need volunteers and of course funds to litigate.  Please forward this to your family and friends and ask them to join the Ratepayers’ Association to help us put a stop to mismanagement and to restore good governance.