Locking Up is Hard to Do

Locking Up is Hard to Do 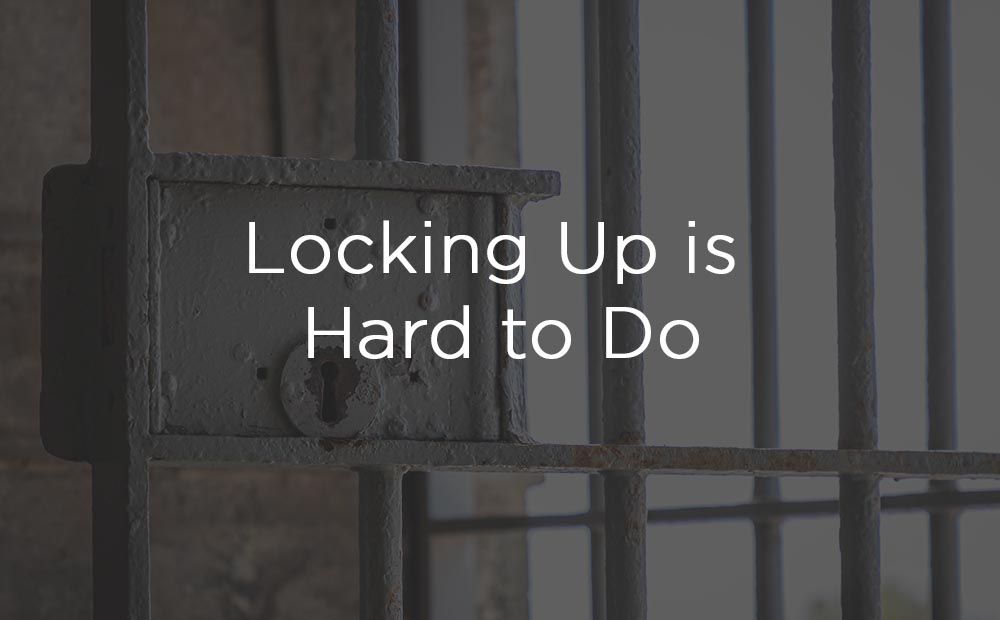 ‘Hang ‘em high’ is not the cry, but we are frequently asked to put corrupt officials and counsellors behind bars and, if possible, throw away the key. Underlying the call is a belief that ‘they’ do what ‘they’ do because ‘they’ always can. The belief is far from warranted.

Why do ‘they’ always escape scot-free?

The problem lies not with the process of laying a charge. Everyone has the right to report the commission of a criminal offence and set wheels of justice in motion. The process is simple. In the charge office, the complainant provides a description of the problem and the officer must open a docket if an offence appears to have been committed. The duty is absolute – the complaint cannot be rejected simply because the officer doesn’t like the smell of it.

So far, so easy, but now the problems start. The docket, once completed, joins a pile of similar complaints perched on the desk of an investigating officer who is both overworked and underpaid. Some of the complaints are easy to resolve: typically, they are the ones in which the offence is simple and there is a specific person that, being the victim of the crime, has an interest in finality. Corruption cases, the sort we are concerned with here, are not like this. Unlike theft, for example, they are complex to prove since they require a showing of intent to corrupt and, causing loss that is entirely generic and diffuse, are really ‘victimless’ in nature.

The result is inevitable. Nothing gets done and the corruption docket drifts slowly but surely to the bottom of the pile. There it languishes until the police decide that the crime is ‘cold’ and so the docket must be shut. The PBRRA can help combat this outcome by investigating the offence fully, providing the investigating officer with carefully researched and properly crafted statements, and ensuring that action is taken by constant scrutiny and follow-up. Even then, however, there will be many cases in which justice flies out of the window as impunity enters the door. Overwork, low skill levels and pervasive corruption have hollowed out our criminal prosecution system.

Well, you ask, isn’t there some way in which the PBRRA can bring the prosecution itself? On the law as it stands, the answer is probably no. Prosecutions can be brought by private people in their own right, but only if they can show that they have a ‘direct and substantial interest’ in the outcome of the case. The owner of stolen property has such an interest and so does a rape survivor, but sourcing the interest in a municipal corruption case is far from straight-forward. The Bitou Council, as the body directly injured by the act of corruption, seems to have the standing to prosecute, but it is by no means clear that the PBRRA has the same right.  Such a right, supposing it exists at all, might be enforceable only upon a showing that the Council obdurately refuses to bring such a case.

The issues of law so presented, intricate though they are, cry out for determination by our courts, but they need the right evidential foundation if the case is not to founder on the facts. The PBRRA is looking for such a case, but so far has yet to find one that is sufficiently open-and-shut to serve the purpose.  This is hardly surprising, since bribery and corruption are secretive and so opaque. The money is typically transmitted not by EFT, which is nice and traceable, but in bundles of cash stuffed into brown envelopes. There are cases, to be sure, in which the charge for a service is so outrageous that an inference of corruption is conceivable (for example, a charge of R124 000 to signpost a cycling route), but even they present serious problems of proof, which (it must be remembered) must be demonstrated beyond reasonable doubt. So the PBRRA must tread carefully lest, being hoist by its own petard, it is the one that is hung high.

The PBRRA does not sit idle in the meantime.  It is aware of the problems in bringing criminal charges, but despite them it will act if we find an appropriate charge. Additionally, it brings civil actions arising out of unlawful conduct that are designed not to just remedy past wrongs but also to prevent future misconduct. These actions are slow and expensive, but we are confident that they do have a significant deterrent effect.